I am proud to pen this editorial after a very successful month. In March we hosted European Commission Executive Vice-President, Frans Timmermans along with MEP Geier and other distinguished panellists and guests at our Annual Conference. There we addressed the question – Gas: Fit for 55? This event provided the opportunity to take stock of our ongoing efforts and reflect on the way forward.

As discussed during the conference, we have just launched a study with our social partners, IndustriAll and EPSU, under the auspices of the European Commission. This will map the skills and training needed for gas sector workers to adapt to the energy transition and work with the new gaseous fuels that will be filling our networks. This is important because we must make sure that the energy transition is a fair transition benefiting not only the environment but also creating jobs, wealth and well-being.

In March we joined a concerted effort by 90 organisations, spanning distribution, transmission, equipment manufacturers and associations, and calling for recognition of the role of blending in reducing carbon emissions while scaling up the volumes of hydrogen and biomethane in the grid. Blending is not just technically feasible, it offers huge potential for hard to abate sectors such as heating, at a time when many European consumers are signing up to gas as a very satisfactory escape from coal. Blending is not the end game, but it is a quick win, a fast step on the pathway to decarbonising gas and developing dedicated infrastructure for hydrogen.

I am particularly proud this month, to announce that Eurogas has increased its climate ambition. We hold established commitments to 2050 climate neutrality and 55% emissions reductions by 2030. At our conference we presented our increased ambition – of carbon neutrality in the gas sector before 2050. In fact, according to our recent DNV study, we can achieve this not much later than 2045, if the correct measures are in place. We were reassured to hear the comments of Executive Vice President Timmermans outlining a very similar pathway to 2050 as that of our DNV study. In Eurogas, we are convinced that gas is Fit for 55 and that over the coming years the role of gas will be critical in achieving climate ambitions.

Beyond these successes we continue to welcome new members – DCbrain as one has contributed to this newsletter. We have welcomed Marcus Newborough of ITM Power to our Board, and Bronagh O’Hagan, as our Communications Director – both have written short introductions below. Eurogas also joined the European Net Zero Alliance, thanks to Paul Voss, ENZA’s Chair, for the article below.

Thank you for reading, and best wishes,

All existing applications that currently use coal and oil and natural gas, can transition to using green hydrogen instead.

ITM Power has joined the Eurogas Board, effective March 2021, highlighting the importance of the association for technology developers, as well as energy suppliers and distributors, at this crucial juncture for energy legislation. Our company, from Sheffield in the UK, has previously demonstrated power-to-gas solutions with Thüga and RWE and is now nearing completion of the REFHYNE project with Shell at the Rheinland refinery in Germany. At its launch, RE FHYNE will be the world’s largest PEM electrolyser plant at 10 Megawatts. (PEM stands for Polymer electrolyte membrane.)

Despite the renewed discussion around this technology in recent years, electrolysis is an old process and a simple process. Discovered at the start of the 19th Century, it passes electricity through water and divides it, splitting it into its two constituents, hydrogen and oxygen. ITM Power’s electrolyser uses renewable electricity from wind and solar, thereby producing renewable hydrogen and renewable oxygen. It leaves no CO2 emissions, nor any associated greenhouse gas footprint. These are also highly responsive; meaning they can follow the variability of renewables and provide flexibility to electricity grid operators.

Projects like REFHYNE, as well as the recent sale of a 24MW PEM electrolyser to Linde, will demonstrate electrolyser technology on an industrially significant scale. Industrial plants, oil refining and the gas grid are typically referred to as hard-to-abate sectors, facing challenges and complications in the path to decarbonisation, so the availability of larger scale electrolysers is a key step forward. It is for this reason it is being watched eagerly by other European industrial clusters, as well as the European Commission. Indeed, European Commissioner for Energy Kadri Simson visited the REFHYNE site in July last year.

As ITM Power’s representative on the Eurogas Board, I am keen to stress that the technology is as much an electricity sector solution as a gas sector solution. We at ITM Power see electrolysers as emblematic of the energy system integration we should be working towards to achieve our climate neutrality goals. However, while the technology may not be new, a clear and coherent policy framework is yet to be put in place that can outline a path for the uptake of renewable and low carbon gases.  Traditionally those sectors – electricity and gas – have been separate. But there are multiple benefits from sector coupling. The policies being made now need to bridge the two, and it is imperative that we get the legislation right in the next couple of years. We can’t wait any longer to begin decarbonising some of these processes. But utilising the full potential of hydrogen will require pragmatism and a lot of cross-sector collaboration.

Done well, REFHYNE and other projects like it can begin to create a backbone against which Europe can build a new energy system and ultimately a hydrogen economy.

DCbrain on the 3Ds of the Energy Transition - Geert Meulenbelt

Obtaining carbon neutrality will require existing systems and infrastructure to manage increasing quantities of decarbonised biogas and hydrogen. The blending of gas with different calorific values, the corresponding traceability of energy origin and the dynamic character of inflows are major challenges. At the same time sector coupling and a tendency towards decentralisation significantly increase the scope and complexity of decision making.

At DCbrain we are convinced that digitisation of networks combined with artificial intelligence contributes to making faster and better decisions for TSOs and DSOs on a wide range of topics: more reliable global forecast and allocation; invoicing based on the energy mix consumed; simulation of investment decisions such as chromatographs or network extensions; and, network steering for dispatchers and asset optimisation.

During the last couple of years we have been able not only to develop these use-cases but also to industrialize them with TSOs and DSOs across Europe, which is the best proof of value and return on investment. A particular point to note is that prescriptions for optimal use of networks combine both lowest cost and minimum carbon footprint scenarios.

We are delighted to join Eurogas as an associate member and look forward to making a contribution to the many challenges the industry is facing today.

DCbrain is a software provider of intelligent network software located in Paris, France with a team of over 20 experts. 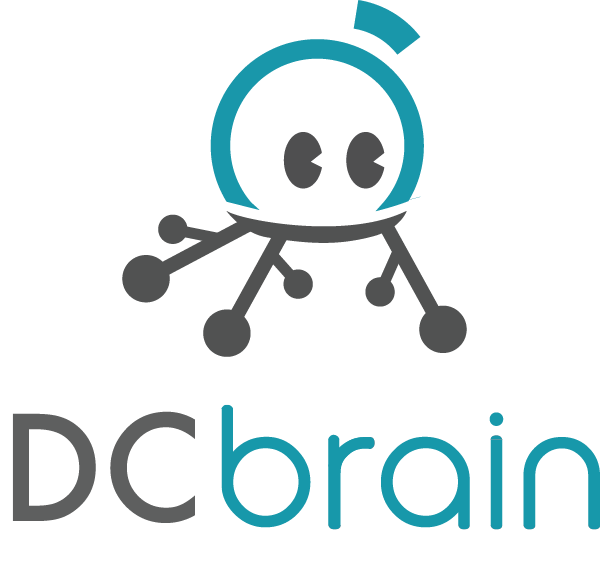 The European Net Zero Alliance (ENZA) is a cross-sectoral alliance of 17 associations dedicated to genuine energy systems integration. Putting the 2050 climate objective at its core, we believe only proper coordination between energy vectors and economic sectors will deliver net zero.

On 30 March, ENZA’s inaugural event saw the European Commission Directorate-General for Energy’s Primary Adviser, Tudor Constantinescu, providing the keynote speech. Mr Constantinescu welcomed ENZA’s timely creation noting: “decarbonising the energy system is happening in a market where many solutions coexist – and this complexity will require innovation not only for technology but also policymaking (…). Systems need to be a lot more flexible but also adaptable and therefore the very concepts of system integration and digitalisation will be crucial.”

Who couldn’t use a change of scene this year? After five and a half good years working in energy policy and communications at FTI Consulting, I’m very pleased to join Eurogas as Communications Director. Having worked with the association in my last life as a consultant, it’s nice to join a team I know well.

The energy transition has been central to my work in recent years, supporting clients in areas from infrastructure and hydrogen to offshore wind. In the current context – the urgency of the climate emergency, and the raft of legislation coming – I’m motivated to contribute to conversations that are based on pragmatism and solutions.

I look forward to working with Eurogas members, our broad stakeholder base, and of course our social partners, EPSU and IndustriAll, through the Sectoral Social Dialogue and our joint study. 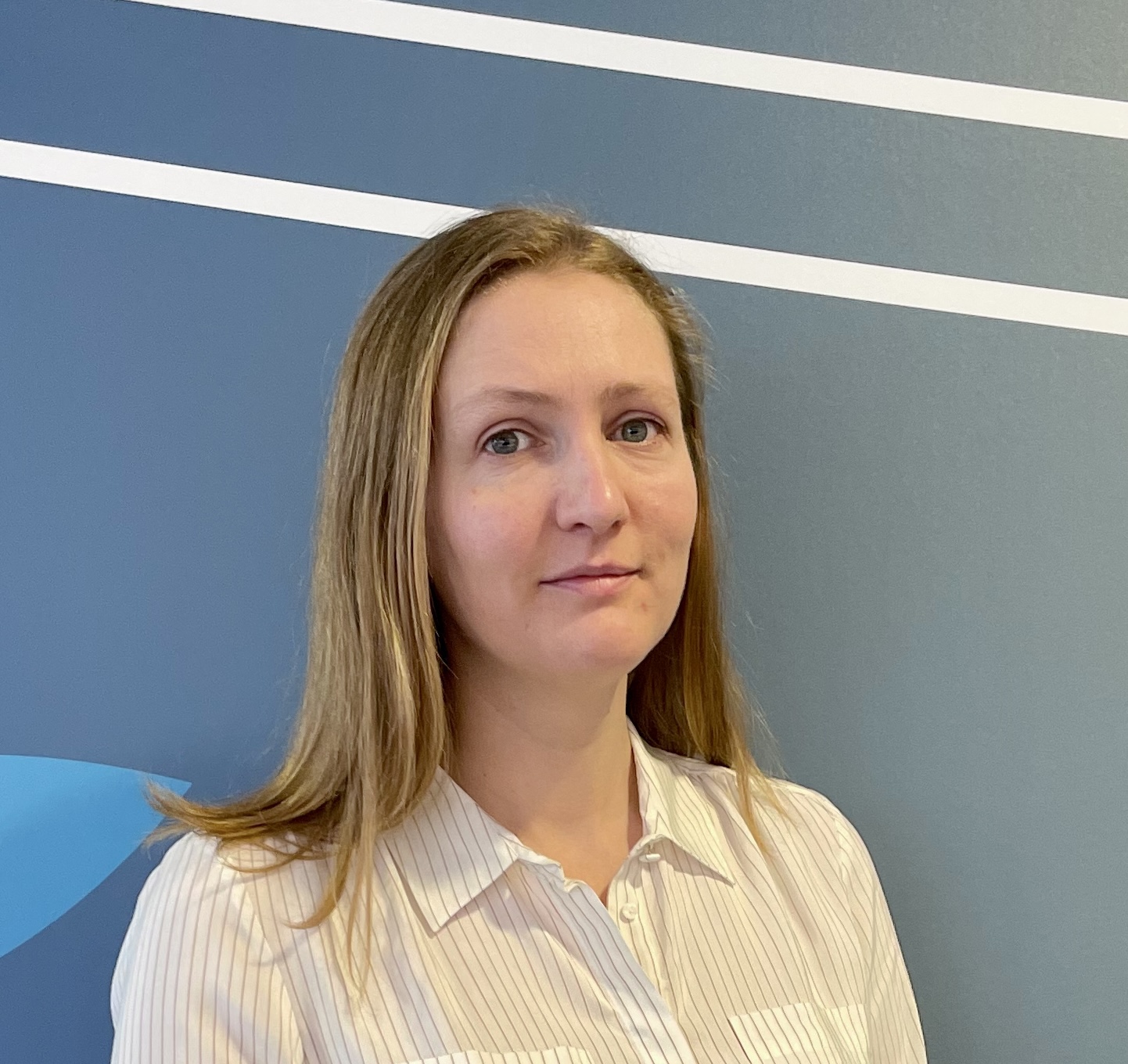 Markus Witt of Vattenfall explains how CHP is decarbonising district heating – and that this can be furthered with hydrogen in the mid- to long-term.

Buildings are a complex piece of the decarbonisation puzzle. Different solutions are required depending on Member States’ energy mixes, and the state of their building stock. One solution, combined heat and power (CHP) increases energy efficiency by producing heat and power from one source. This technology has many applications from industrial processes to district heating. District heating is commonly used across Europe in combination with CHP, and can run on a wide range of energy sources.In recent years, Vattenfall has invested around 1 billion Euros in improved district heating, including replacing a lignite powered CHP plant, and as such has achieved more than 50% emissions reductions. Hydrogen can increase these emissions reductions further. Markus cites a recent Agora Energiewende publication which sees hydrogen in residential heating in the mid- to long-term, especially in combination with efficient technologies like CHP. Policy makers can help optimise the role of hydrogen, including in buildings, by supporting: 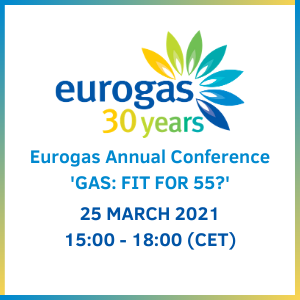 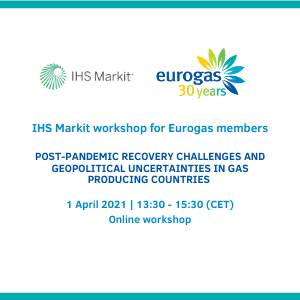 Experts from IHS Markit will present to Eurogas members a workshop about the Post-pandemic recovery challenges and geopolitical uncertainties in gas producing countries on 1st April 2021 from 13:30 to 15:30 (CET). For more info contact events@eurogas.org

If you are not yet a member of Eurogas but would like to hear more about membership benefits, contact Sarah.Kempe@eurogas.org 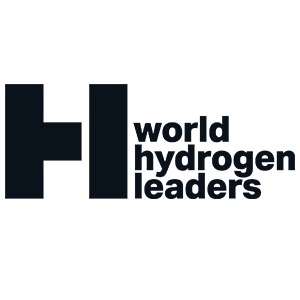 World Hydrogen Leaders Conference ‘World Hydrogen Large-Scale Electrolysis’ | 28 April 2021
As the mobilisation and acceleration of electrolyte production remains insufficient to meet rapid decarbonisation goals for the energy sector, World Hydrogen Leaders returns to this hot debate. How can the hydrogen sector ramp up the rollout of large-scale electrolysis plants in order? Should we prioritise PEM or Alkaline technologies? Could efficiencies be greater with Solide Oxide? How and when will we unlock the cost curve? Will grid infrastructure or transportation be ready to cope with large quantities of hydrogen? Join this virtual conference to deep-dive into the remaining bottlenecks to rolling out large-scale electrolysis, solutions to scaling up and innovations in the field. Hear from leading hydrogen project developers, electrolyser manufacturers, compression companies, engineering firms, infrastructure and transport and more! More information on this event here.
Eurogas is pleased to be a partner at the World Hydrogen Leaders Conference ‘World Hydrogen Large-Scale Electrolysis’ . 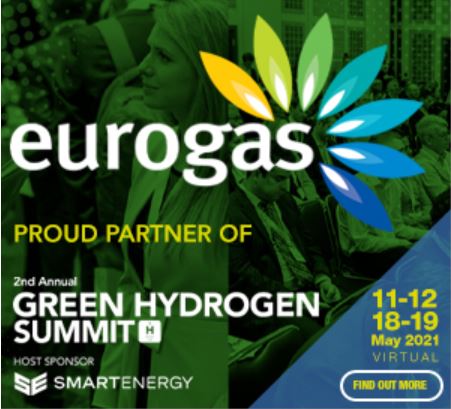 2nd Annual Green Hydrogen Summit | 11-12, 18-19 May 2021
Governments across the world have put hydrogen at the centre of their decarbonisation plans with billions of dollars allocated to stimulating the market and whilst individual strategies will differ, the theme is the same: green hydrogen is the fuel of the future. The Green Hydrogen Virtual Summit will facilitate that with a high-level agenda packed with government and private sector decision-makers and a Meeting Hub for deal-making. The agenda will bring together renewable power generators, project developers, debt providers and investors, gas grids and off-takers to define a new energy era fuelled by hydrogen. Find out more on this event here.

Eurogas is pleased to be a partner at the 2nd Annual Green Hydrogen Summit. 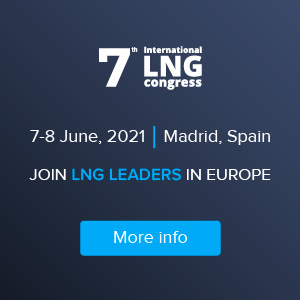